As with most things about a car, there is always more than one option and usually, there is always an inconclusive debate that accompanies these options as to which is the right one. This is a conundrum that you will most often run into when it comes to choosing a motor oil. There are two major variants – synthetic and non-synthetic(also sometimes called conventional oil). Each has its merits and demerits making this choice quite a complicated one. A lot depends on your lifestyle and the way you ride your car. Today we will compare the two and help you figure out which motor oil is the best for you.

What is the basic difference?

They both start out in similar ways. There is a stock oil that is derived from crude oil. Non-synthetic motor oil only involves a few refining processes. A lot of the mineral content and some impurities still remain. Synthetic oil can also start out life as a crude oil which is then mixed with a synthetic compound and the two are refined so much that they get broken down to the very basic molecules. This removes all traces of impurities and any unwanted compounds. This also allows manufacturers to tailor the oil to enhance a certain characteristic such as making it more viscous or making it better-suited for a higher temperature range and so on. All this refining and customizing does not come cheap and easy and that is where the choice lies.

Longevity: This is the biggest reason behind getting synthetic oil. Its careful synthesis and multiple refining processes makes it retain its composition and its integrity even after being subjected to multiple cycles of the engine starting up, heating up and then the engine switching off and the oil cooling down. This happens every time you take the car out for a drive and then come back and park it. A non-synthetic oil, on the other hand, will not be able to maintain its chemical composition for nearly as long and will disintegrate far sooner making it less efficient and therefore less durable.

Temperature endurance and stability: The regular car engine can get really heated up especially if it used for a long duration of time without stopping. This high temperature can hasten the chemical processes that can break the molecules up that make up the oil. The synthetic oils are more resistant to this breakdown and thus will offer a stable amount of lubrication even in these conditions. A non-synthetic oil can lose its ability to lubricate properly, either permanently or temporarily, which can cause damage to the moving parts of the engine when it needs lubrication the most. These conditions are usually encountered in city driving or at high speeds and if you do either then you are better off with a synthetic oil. 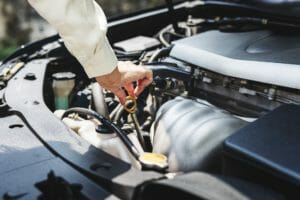 Sludge formation: As the oil keeps disintegrating and the molecules that make it start breaking up, they collect inside the engine in the form of sludge that tends to stick to the various parts of the engine. This reduces their ability to move freely which in turn drastically reduces the efficiency of the motor. This will result in faster wear and tear of the motor as well as a reduction in fuel economy and power delivery. The car can start feeling sluggish and have starting troubles as well. Here too, it is the synthetic motor oil that scores highly and is able to last almost two to three times longer before breaking down and forming sludge.

Lifestyle: This might be what ultimately casts the deciding vote on which option to go for. If you are fairly regular with your car maintenance and take fastidious care of it then you can get away with using a non-synthetic motor oil. If, however, you want to be more flexible with the maintenance of your car and you want it to run for as long as possible between servicing stops then a synthetic motor oil will be perfect for you. Another important factor is your driving style. If you do not rev the motor hard and are gentle with your throttle and clutch usage then you can use a traditional motor oil. If on the other hand, you like to push your car to the limits often then a synthetic oil becomes the only choice.

Type of car: This might also play a big role. Some older cars actually require traditional non-synthetic motor oil to work correctly. This will usually be mentioned in the car’s manual. Similarly, many newer cars require synthetic oil to work correctly. Follow the necessary requirements to avoid damaging the engine or the reliability of the car.

Cost: This is the only avenue where the good old non-synthetic engine oil trumps its more sophisticated synthetic cousin. As we alluded to earlier, all the extra steps involved in the refinement and synthesis of a synthetic oil makes it almost five to ten times costlier as compared to a non-synthetic variant. They do last longer but can increase the cost of servicing drastically. In the long run, though, they can reduce the cost of ownership of the car by making the parts last longer. You can also go longer between services and you have more flexibility with the timing of these services. The idea here is to find the option that saves you the most money over the life of the car. Synthetic oils are expensive in the short-term but beneficial in the long run and this is exactly the opposite when it comes to a non-synthetic engine oil.

Both have their plus points and the final choice will depend on how you use your car. If it is a relatively new model and you would like to own it for a long time while servicing the car less often then go for the synthetic oil. If, however, you do not plan on owning the car for long and you can drive the car carefully as well as service it on time then go for the non-synthetic oil by all means. It all boils down to what you want. Short term savings or long term peace of mind.

Why it is Important to Check Your Tire Pressure and How to Do it
Auto World October 25, 2018